Person with a pendant alarm in the early 1980s. The ‘hub’ is on the shelf. 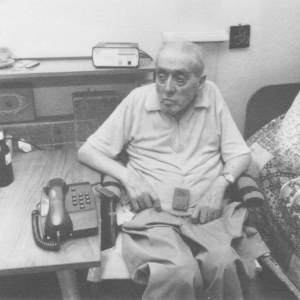 Source: Staying at home: Helping elderly people HMSO 1984.
Author: Professor Anthea Tinker (To whom many thanks for the copy).

As far as we know this study was the first evaluation of housing options for older people that included costings and detailed information on various alarm systems. It was based on surveys for the Department of the Environment (DOE, as it was at the time) of all council housing departments in England and Wales in 1977. The research was undertaken between 1977 and1983 and the surveys had a 92% response rate and were followed by phone interviews.

Jacques von Speyer, CEO of US Tele-Medicine reflects on his recent experience of talking to industry leaders at the ATA conference.

I was at the ATA conference a couple of weeks ago and found a certain commonality; no one is making money right now in telemedicine. Of all the device vendors, both the new ones from Korea, Taiwan, China, Israel, France and Switzerland, to the branded names like Intel, GE, AT&T, Bosch, Honeywell and the others, not one of them has produced an important single flow of income.

The entire industry seems to be waiting for some payor or another to step forward and be the first to implement a national system of sufficient proportions to kick start telemedicine in the USA. One difficulty to achieving that is the fact that US industries and governments are in abeyance until the election, and the prospect of redefining how someone approaches healthcare and its delivery, based on an uncertain economic indicators, is difficult. Entities are comfortable with the status-quo and after all, eventually, everyone seems to be receiving healthcare irrespective of cost or time involved. So where is the incentive to change? It appears that not even the inherent savings appropriated in most telemedicine programs is enough of a motivator to push telemedicine along in the USA.

Basically we are all waiting for the ‘eventuality’ to take place, and it will. The challenge for most, however, is to stick around long enough to benefit from it.

Report from Holyrood Conference’s 3rd Telehealthcare Summit in Glasgow this week gives a snapshot of the discussions and Scottish Government position. If readers who attended would like to submit other reports (or links to them) we will be happy to fill out the picture on this major Scottish event. Scotland seen as world leader in telehealth and telecare.

The forefront of mHealth: Learning from Saxon times

Spend 15 minutes with a cup of coffee and the video below to hear Dr Leslie Saxon sum up the present situation for remote monitoring of patients with heart implants and the case for, and current limitations on, mHealth generally. “It’s a civil rights issue.” Wow! It’s better than many a two-day conference. Don’t miss the anecdotes that start at 8mins 45secs.

See this TEDMED page for biographical information on Dr Saxon.

RELATED NEWS ITEM May 16, 2012: Philips has announced the latest addition to the company’s remote diagnostic arrhythmia and remote patient monitoring portfolio, CardioCare Wireless Arrhythmia Services, to streamline the complex process of remotely monitoring cardiac patients and capture critical information sooner. Only in the US at present. HealthTech item.

Who, What, When? The History Project

If I do a twice daily ward round on my patients and look at the physiological signs recorded by the nurse and take a history, possibly pick up on unnoticed issues that my years of experience detect, I would like to think I make an impact on the outcome of patients’ illnesses as well as their sense of well being… END_OF_DOCUMENT_TOKEN_TO_BE_REPLACED