Contrast for today: pebbles and gems

Today was structured with plenary sessions in the morning with a round of workshops in the afternoon, and time to view the exhibition over lunch and between sessions.

The day started well with an opening address by Malcolm Fisk, Chair of TSA who flagged up an issue of particular interest to this reporter. That is, terminology in this field. He talked about the labels applied to the range of assistive technologies from spectacles, etc. to remote patient monitoring (RPM) and he suggested that ‘telecare’ could be used in a superordinate way to encompass the electronic technologies from pendant alarms to RPM. Whilst to many in the audience, used to thinking of ‘telecare’ as defining ‘smarter emergency alarms’ this may seem aberrant, the approach holds some interesting possibilities. If possible, further information will be posted in the Terminology section of this site to expand on the theme. Gem? Well, semi-precious stone at least.

For me, the next two sessions were pebbles. Tim Ellis, the Whole System Demonstrator Programme Manager for the Department of Health followed by Janice E Knoefel, Geriatrician in the Extended Care System of the New Mexico Veteran Health Care System, Department of Veterans Affairs. Maybe they covered what the majority of the audience (comprising people from a non-health background) needed to hear about telehealth but I suspect that the majority of Telecare Aware readers, hoping for some enlightenment and deeper insights than previously published in various places, would have been equally disappointed.

Most of the content of Tim Ellis’s session will be familiar. (If not, search Telecare Aware for WSD or start with this recent update on the WSDAN site.) He covered the history of the project and its problems and said that early results have been ‘very promising’. He also said that the results of the programme will feed into business cases but, having a dig at the equipment suppliers, said “the business case is easier to make if the equipment is cheaper.”

At the end of his presentation Tim showed an insipational video of telehealth in Newham. It does not yet seem to be available on their website, but there is one which you may want to watch, plus some Tunstall video case studies. You may also want to watch a BBC video of Tim Ellis demonstrating various telecare/telehealth technologies.

Janice Knoefel’s session was disappointing simply because her presentation slides were her reading notes. Her undulating tones and succession of difficult-to-read white text on blue slides were sporific. You may as well read them yourself, so, if possible, I will post a link to them if/when they become available. From the occasional asides, there were snippets: The VA has lots of care standards, but is driven by the bottom line – the more cost effective they are, the more veterans they can treat. Also, because they recognise that they cannot be all things to all patients, they target patients where they can have greatest effect on their care costs.

So where were the gems?

I confess I missed the following two plenary sessions (Working Smartly with Assistive Technology and Telecare, Clive Evers of the Alzheimer’s Society, and Digital Britain – the opportunities for telecare and telehealth providers and users, Richard Foggie, Department for Business, Innovation and Skills). My apologies if I missed two gems, but as one attendee remarked to me, the conference within the conference was going on in the exhibition area. It was certainly where most exchange of information, news and ideas was happening, and that’s where I did find some gems.

In no particular order they were:

a) The CareIP home telecare/telehealth hub, produced by Swedish company CareTech and marketed exclusively in the UK by Cirrus communications. The completely broadband-based system can connect devices to any call centre – always on, secure, and with no call costs. 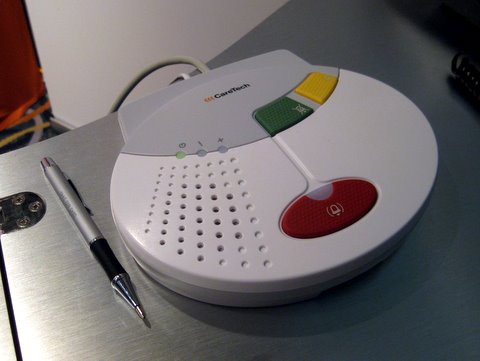 b) The Everon system. Fast-to-install, easy-to-scale, fantastically reliable (thanks to its built-in protocols) wireless person monitoring and tracking. In the first year on sale in its native Finland it became the biggest-selling system in the care home market.

c) React Technologies’ implementation of the eye-catchingly small but sophisicated Ekahau tracking/tagging/two-button communication device. It can not only be used as a panic alarm but can be integrated into a whole network of ‘intelligent alerts’. For example, the system can be programed to ‘know’ when the last staff member leaves a building and can remind them to take certain actions. 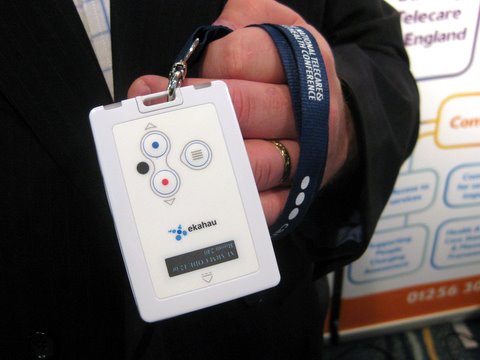 d) The Novalarm (Verklizan Group) UMO system which has the potential to remove the need for fixed call centres, taking out a considerable overhead cost.

e) One gem I can’t show you yet because it isn’t properly launched in the UK. All I can say for the moment is that while nothing is perfect in the telecare world, the user-accepability of this tracking device will come pretty close. Pshaw!

Putting a Fun point on it

The team from SupraUK, suppliers of key safes and other safe boxes to the UK’s telecare industry, and one of the main conference sponsors, always go out of their way to inform and entertain. This year they emphasised their theme of Saves Time, Saves Lives by decking out their stand with a Tardis, and themselves in Dr Who costumes. It’s a great marketing gimick in the best sense of the word, making what could be a pedestrian product into an instantly recognisable brand amongst the conference attendees. 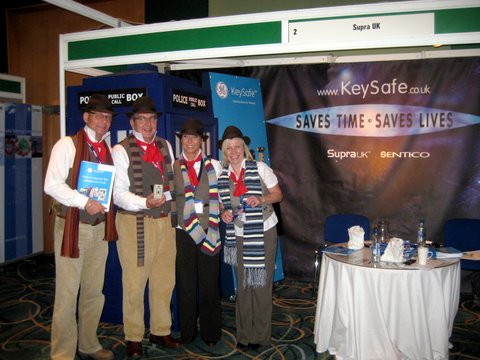